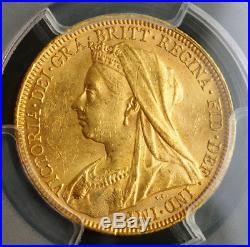 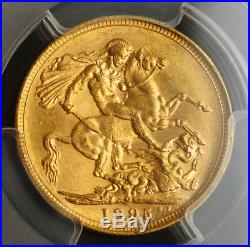 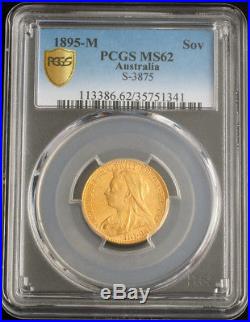 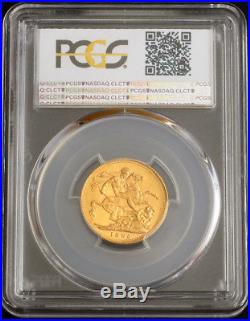 1895-M, Australia, Queen Victoria. Mint Date: 1895 Reference: KM-13. Denomination: Sovereign Mint Place: Melbourne (M) Condition. Certified and graded by PCGS as MS-62! 917 Diameter: 22mm Weight: 7.98gm. Obverse: Crowned and veiled bust of Queen Victoria left. Legend: VICTORIA D : G : BRITT : REG : F : D : Reverse: St. George, wearing Attic helmet, right on horse, holding sword in preparation to dispatch prostrate and wounded Dragon below. Mint initial (M) on ground, date (1895) in exergue. Broken shaft of lance to left on ground, engraver´s initials B. Below ground to right. (May 29, 1783 September 16, 1855) was a talented engraver of gemstones, cameos, coins and medals. Born in Italy, he moved to London in 1815 and was employed at the Royal Mint as an engraver, where his most famous work is his portrayal of St. George & the Dragon used on British gold sovereigns and crowns first created during the Great Recoinage of 1816. He also engraved the dies for many other coins, medals, and medallions, including the Waterloo Medal, which took him over thirty years to complete. He refused to copy the work of any other artist or engraver, and insisted that all his work was his own original work. Because of his Italian origin, he was not officially recognised as the chief engraver at the Royal Mint, and there were rivalries with other engravers including the Wyon family. Victoria (Alexandrina Victoria; 24 May 1819 22 January 1901) was from 20 June 1837 the Queen of the United Kingdom of Great Britain and Ireland and from 1 May 1876 the first Empress of India until her death. Her reign as Queen lasted 63 years and seven months, longer than that of any other British monarch to date. The period centred on her reign is known as the Victorian era. Though Victoria ascended the throne at a time when the United Kingdom was already an established constitutional monarchy in which the king or queen held few political powers, she still served as a very important symbolic figure of her time. The Victorian era represented the height of the Industrial Revolution, a period of significant social, economic, and technological progress in the United Kingdom. Victoria’s reign was marked by a great expansion of the British Empire; during this period it reached its zenith, becoming the foremost global power of the time. Victoria, who was of almost entirely German descent, was the granddaughter of George III and the niece of her predecessor William IV. She arranged marriages for her nine children and forty-two grandchildren across the continent, tying Europe together; this earned her the nickname “the grandmother of Europe”. She was the last British monarch of the House of Hanover; her son King Edward VII belonged to the House of Saxe-Coburg and Gotha. Through her mother, she was also a first cousin twice removed of Maria Theresa, Holy Roman Empress. The item “1895-M, Australia, Queen Victoria. Gold Sovereign Coin. Melbourne! PCGS MS-62″ is in sale since Wednesday, July 18, 2018. This item is in the category “Coins & Paper Money\Coins\ World\Australia & Oceania\Australia\Gold”. The seller is “coinworldtv” and is located in Europe. This item can be shipped worldwide.