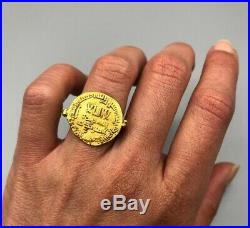 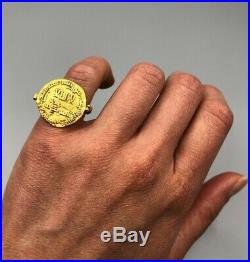 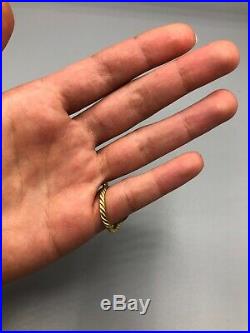 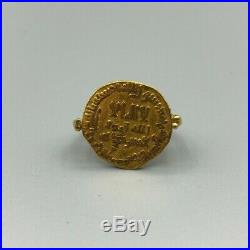 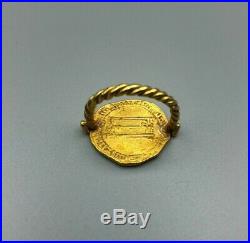 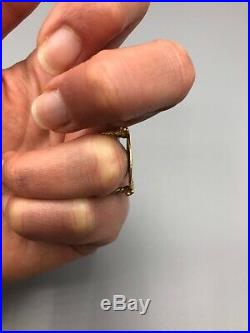 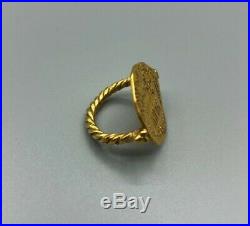 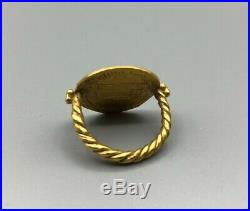 8th-9th century AD solid gold ring with twisted gold shank, gold pellet shoulders, and a bezel made from a gold Abbasid caliphate dinar coin. Quite an unusual ring. It is believed to be a Viking ring. I had the metal content tested by X-ray fluorescence (XRF) spectroscopy and it tested as. Coin: 23 kt with the two main metals being 96.43% Au and 2.56% Ag. Twisted shank: 17 kt (‘Non-Standard Karat’) with the main metals being Au 72.39%, Ag 22.76%, Cu 3.67%. Based on my research into Islamic coins, the coin itself appears to be an early Abbasid (gold) Dinar coin as it only has one marginal legend on the back instead of two. I do not read ancient Arabic so unfortunately cannot tell the exact year/ruler/place where the coin is minted as this is usually in the text of the coin. The other text on the coin usually includes verses from the Qur’an. Now it is really unusual to see both Viking and Islamic features in an ancient ring but multiple scholarly publications (see Ref 1) report evidence of Viking-Islamic trade in at least 10th century AD although probably earlier. For example, the silver hoards found at the Gnezdovo settlement, situated in the westernpart of Russia, along the river Dnepr, near the city of Smolensk, contain more than 1000 Arabic Coins. One scholarly research article used XRF spectroscopy to link the Arabic silver coins as the silver source in some of the Viking jewelry also discovered in the hoards (see Ref 2). In these ancient times most jewelry was made from the melting of coinage and although there are no research articles testing GOLD Viking jewelry content, XRF analysis of Anglo-Saxon Jewelry of this similar time period is consistent with this theory. See research article Ref 3: where several Anglo-Saxon jewelry pieces are tested by XRF and the alloys are coin-type alloys – eg gold and silver in varying quantities with a few percent of copper. This is consistent with the XRF analysis of the braided band – it’s a non standard karat as it was likely made from whatever melted down coins the jeweler had at his disposal at that point in time. This ring weighs a nice 6.02 grams and internal diameter width is 17mm. Due the shape of the ring though it fits more like a size 4-4.5, which is perfect for a woman’s finger or a man’s pinky ring. This ring would make a great addition to any ancient/antique ring collection! 1 “Evidence for Viking-Islamic Trade Provided by Samanid Silver Coinage”. East and West Vol. 1/4 (December 1987), pp. 2 “Arabic Coins as a Silver Source for Slavonic and Scandinavian Jewellers in the Tenth Century AD” Eniosova N. (eds) Proceedings of the 37th International Symposium on Archaeometry, 13th – 16th May 2008, Siena, Italy. 3 “XRAY FLUORESCENT ANALYSIS OF ANGLO SAXON JEWELLERY” P. Volume 15, Issue 2 July 1973 Pages 175-192. The item “8th-9th century AD Solid Gold Ring with Abbasid Caliphate Dinar Coin” is in sale since Sunday, March 10, 2019. This item is in the category “Antiques\Antiquities\Roman”. The seller is “mz_llx” and is located in San Francisco, California. This item can be shipped to United States, United Kingdom, Denmark, Romania, Slovakia, Bulgaria, Czech republic, Finland, Hungary, Latvia, Lithuania, Malta, Estonia, Australia, Greece, Portugal, Cyprus, Slovenia, Japan, Sweden, South Korea, Indonesia, South africa, Belgium, France, Hong Kong, Ireland, Netherlands, Poland, Spain, Italy, Germany, Austria, Bahamas, Israel, Mexico, New Zealand, Singapore, Norway, Saudi arabia, Ukraine, United arab emirates, Qatar, Kuwait, Bahrain, Croatia, Malaysia, Colombia, Panama, Jamaica, Viet nam, Uruguay, Ecuador, Sri lanka, Luxembourg.