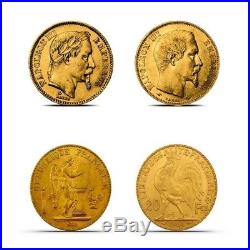 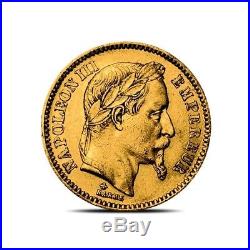 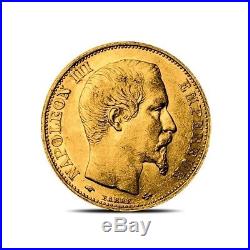 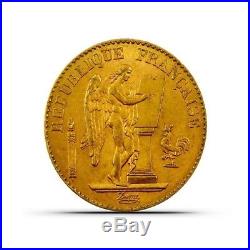 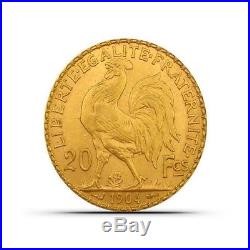 Napoleon Laureate and Bare Head 20 Franc Types There are two versions of the Napoleon III 20 Franc: the Bare Head and the Laureate Head. Both display a portrait of Napoleon III, but the latter shows the emperor wearing a wreath. The inscriptions NAPOLEON III EMPEREUR appear at the edge along the name BARRE as a nod to the coins designer. The Bare Head style was struck from 1852 to 1860, while the laureate edition was made from 1861 to 1870. Reverse When the portrait of Napoleon was modified in 1861, the coins reverse underwent a redesign too. The 1852 to 1860 Bare Head version features a wreath with the country of origin (EMPIRE FRANCAIS) at the edge, along with the date and denomination in the center. The coins mintmark is engraved at the bottom; A refers to the Paris Mint while BB is the mintmark of the Strasbourg facility. On the 1861 to 1870 edition, meanwhile, the wreath is replaced by the empires coat of arms. About the Napoleon III 20 Franc Gold Coin The reign of Napoleon III was marked by turmoil, war, and controversy. One could argue that Napoleon III had the ambition and drive of his uncle (the famous Napoleon I), but lacked the same level of military and leadership skill. Nonetheless, the French ruler projected an image of power on this countrys coinage. The 20 Franc proudly declared Napoleon III as the emperor. Even though France as a nation had its ups and downs in the mid-late 19th century, its 20 Franc gold pieces became one of the worlds most popular coins. To this day, it remains a trusted and low-premium means of owning gold. 20 Franc Gold Angel The obverse of each Gold Angel is a recreation of Augustin Duprés original design, which first appeared on the 1 Louis D’Or gold coin in 1792. Dupré was Frances fourteenth Engraver General of Currency, holding his post during the French Revolution. According to legend, Dupré narrowly escaped the guillotine, thanks to the Gold Angel he carried in his pocket (and used to bribe a guard). Beginning with that pivotal moment in history, the French coin came to be known as the Lucky Gold Angel a talisman even carried by Napoleon Bonaparte, until he lost it the evening before his devastating defeat at the Battle of Waterloo. 20 Franc Gold Rooster The obverse of each Gold Rooster features the beautiful head of Frances Third Republic, established after Napoleon IIIs catastrophic defeat in the War of 1870. The republic remained in place until 1940, when it collapsed at the hands of the Second World War. The obverse is also inscribed with the words REPUBLIQUE FRANCAISE. The reverse of each 20 Franc Gold Rooster features a proud and fully-plumed cockerel, which has evolved to symbolize the fighting spirit of the French Revolution. Each coin is inscribed with the words 20 FCS and LIBERTE EGALITE FRATERNITE, which means Freedom, Equality and Fraternity, sentiments popularized during the coup d’état against Louis XVI. Yet after more than 600 illustrious years of circulation, France abandoned the franc in 2002, officially adopting the Euro. The Paris Mint (or Monnaie de Paris) was established in 864, making it the oldest institution in France. The francFrances official form of currency for centurieshas enjoyed a grand, though often turbulent history, since its 1360 inception. The item “4 Pc 20 Franc Gold Coin Type Set (Nap Bare Head, Nap Laureate, Angel & Rooster)” is in sale since Wednesday, June 27, 2018. This item is in the category “Coins & Paper Money\Bullion\Gold\Coins”. The seller is “providentmetals” and is located in Addison, Texas. This item can be shipped to United States.