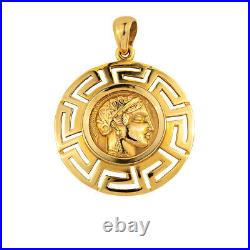 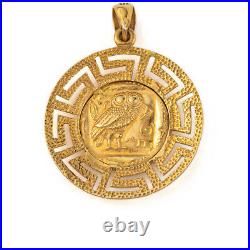 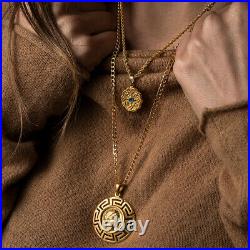 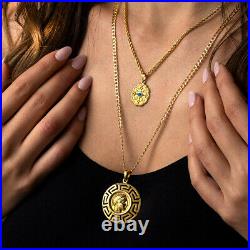 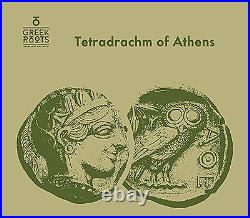 Goddess Athena and Owl Pendant – 14K Solid Gold. This coins illustrate the portrait of Goddess Athena on the one side and the wisdom owl on the other. Beautiful and timeless coin pendant. Made of 14k gold. Diameter 3.3 cm – 1.29 in height 4.3 cm – 1.69 in weight 9.3 grams. Free Gift Box for this item. Goddess Athena and Owl – Athenian silver tetradrachm. Dracma was the currency used in Greece during several periods in its history. The tetradrachm was an Ancient Greek silver coin equivalent to fourdrachmae in Athens it replaced the earlier “heraldic” type of didrachms and it was in wide circulation from ca. This coin belongs to the so-called “new style Athenian coins” minted between 166 and 64 B. And is considered one of the most popular ancient Greek coins which illustrate the portrait of Goddess Athena on the one side and the wisdom owl on the other. Athena is an ancient Greek goddess associated with wisdom, handicraft, and warfare. Athena was regarded as the patron and protectress of various cities across Greece, particularly the city of Athens, from which she most likely received her name. She’s usually shown in art wearing a helmet and holding a spear. Her major symbols include owls, olive trees, and snakes. Her temples were located atop the fortified Acropolis in the central part of the city. The Parthenon on the Athenian Acropolis is dedicated to her, along with numerous other temples and monuments. Her main festival in Athens was the Panathenaia, which was celebrated in midsummer and was the most important festival on the Athenian calendar. In the classical Olympian pantheon, Athena was regarded as the favorite daughter of Zeus. The owl traditionally accompanies Athena. Because of such association, the owl has been used as a symbol of knowledge and wisdom. The inscriptions contain the city’s “national” appellation? Deliveries in remote areas will be made through Hellenic post. The product clearance cost regarding non-E. The art jewellery creation adventure begun on 1975 when Vasilis and Marianna Nikolaidis established their own jewellery workshop businesses creating hand made jewelry, exploiting their previously acquired working experience, with a great emphasis on robustness and detail. Continuing to create and produce jewelry both Vasilis and Marianna decided in 1981 to open their first retail shop in the area of Acropolis, named Greek Roots. George Nikolaidis, the son of Vasilis and Mariannas, raised in the workshop and he followed jewellery design and gemmology studies in the Mokume college having the unique opportunity to share his passion for jewellery craftsmanship by actively involving in his family business. George continues familys jewelry tradition having as a vision to provide state of the art jewelry with an affordable price, unique quality and a wide range of designs. We are happy to receive your questions. We normally respond within 24 hours. This item is in the category “Jewelry & Watches\Fine Jewelry\Necklaces & Pendants”. The seller is “greekroots.shop” and is located in this country: GR. This item can be shipped worldwide. 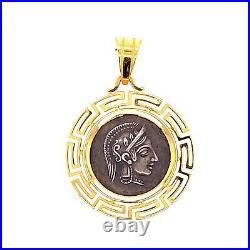 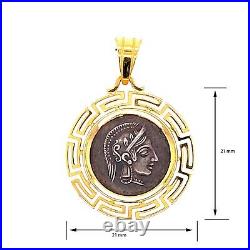 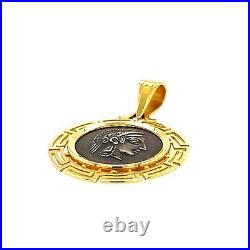 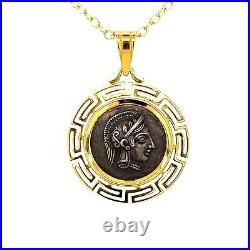 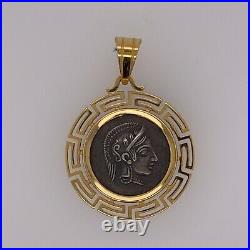 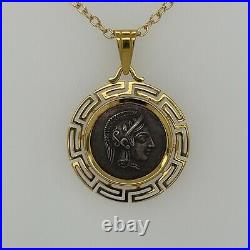 GODDESS ATHENA COIN PENDANT 14K SOLID GOLD AND 925 STERLING SILVER. ALL IMAGES HAVE BEEN ENLARGED CHECK THE DIMENSIONS. FRAME METAL : 14K SOLID GOLD. COIN METAL : 925 STERLING SILVER. PLEASE NOTE THAT COIN IS NOT ANCIENT. WEIGHT : 2.00 gr. This item is in the category “Jewelry & Watches\Fine Jewelry\Necklaces & Pendants”. The seller is “karikasjewels” and is located in this country: GR.