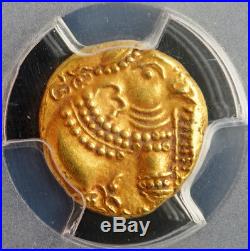 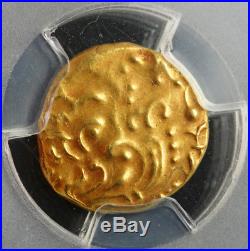 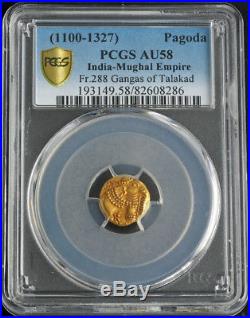 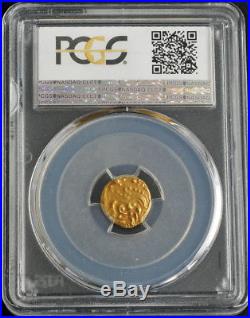 Certified and graded by PCGS as AU-58! Reference: Mitchiner, Karnatka-Andhra 192, Friedberg 288. Diameter: 15mm Material: Gold! Obverse: Caparisoned elephant standing right, wearing pelleted jewellery. Reverse: Ornamental floral scroll. The Western Gangas Elephant (Gajapati) Pagoda circulated in Lanka as is evidenced by a hoard of 179 discovered in 1922 at Allaippiddi in the Jaffna district. Mitchiner is of the opinion that this series of coins, which are found across a wide area of southern Karnataka, was introduced by the Western Gangas and continued by the Hoysalas. Some of the Pagodas have one or two varying Kannada characters above the elephant, others have symbols including a dagger or conch, while most have nothing visible above the elephant. The Western Ganga Dynasty (3501000 CE) was an important ruling dynasty of ancient Karnataka in India. They are known as Western Gangas to distinguish them from the Eastern Gangas who in later centuries ruled over modern Orissa. The general belief is the Western Gangas began their rule during a time when multiple native clans asserted their freedom due to the weakening of the Pallava empire in South India, a geo-political event sometimes attributed to the southern conquests of Samudra Gupta. The Western Ganga sovereignty lasted from about 350 to 550 CE, initially ruling from Kolar and later moving their capital to Talakad on the banks of the Kaveri River in modern Mysore district. After the rise of the imperial Chalukyas of Badami, the Gangas accepted Chalukya overlordship and fought for the cause of their overlords against the Pallavas of Kanchi. The Chalukyas were replaced by the Rashtrakutas of Manyakheta in 753 CE as the dominant power in the Deccan. After a century of struggle for autonomy, the Western Gangas finally accepted Rashtrakuta overlordship and successfully fought alongside them against their foes, the Chola Dynasty of Tanjavur. In the late 10th century, north of Tungabhadra river, the Rashtrakutas were replaced by the emerging Western Chalukya Empire and the Chola Dynasty saw renewed power south of the Kaveri river. The defeat of the Western Gangas by Cholas around 1000 resulted in the end of the Ganga influence over the region. Though territorially a small kingdom, the Western Ganga contribution to polity, culture and literature of themodern south Karnataka region is considered important. The Western Ganga kings showed benevolent tolerance to all faiths but are most famous for their patronage towards Jainism resulting in the construction of monuments in places such as Shravanabelagola and Kambadahalli. The kings of this dynasty encouraged the fine arts due to which literature in Kannada and Sanskrit flourished. Of 978 CE, is an important work in Kannada prose. Many classics were written on various subjects ranging from religion to elephant management. The Hoysala Empir was a prominent South Indian Kannadiga empire that ruled most of the modern day state of Karnataka between the 10th and the 14th centuries. The capital of the Hoysalas was initially located at Belur but was later moved to Halebidu. The Hoysala rulers were originally hill people of Malnad Karnataka, an elevated region in the Western Ghats range. In the 12th century, taking advantage of the internecine warfare between the then ruling Western Chalukyas and Kalachuri kingdoms, they annexed areas of present day Karnataka and the fertile areas north of the Kaveri River delta in present day Tamil Nadu. By the 13th century, they governed most of present-day Karnataka, minor parts of Tamil Nadu and parts of western Andhra Pradesh in Deccan India. The Hoysala era was an important period in the development of art, architecture, and religion in South India. The empire is remembered today primarily for its temple architecture. Over a hundred surviving temples are scattered across Karnataka, including the well known Chennakesava Temple at Belur, the Hoysaleswara Temple at Halebidu, and the Kesava Temple at Somanathapura. The Hoysala rulers also patronised the fine arts, encouraging literature to flourish in Kannada and Sanskrit. The item “India, Western Ganga Dynasty (1080-1138AD) Gold Elephant Pagoda Coin. PCGS AU58″ is in sale since Tuesday, May 29, 2018. This item is in the category “Coins & Paper Money\Coins\ World\Gold”. The seller is “coinworldtv” and is located in Europe. This item can be shipped worldwide.