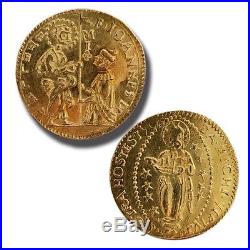 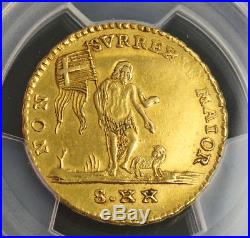 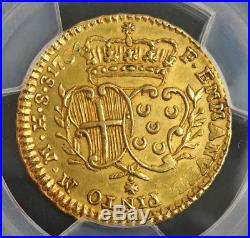 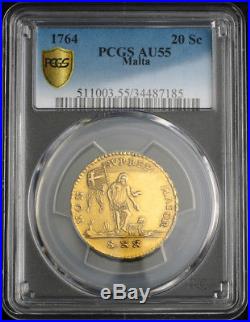 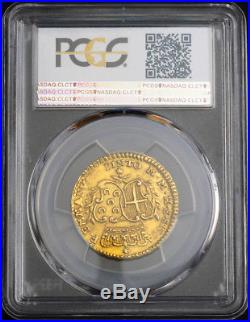 1764, Knights of Malta, Emmanuel Pinto. Scarce Gold 20 Tari Coin. Mint year: 1764 Denomination: Gold 20 Scudi References: Friedberg 35, RS 25, KM-275. Certified and graded by PCGS as AU-55! 840 Diameter: 28mm Weight: 16gm. Obverse: Saint John the Baptist standing facing, holding banner in right hand and pointing to lamb at feet with left. XX = 20 Scudi below. Non greater has arisen! X Reverse: Crowned quartered coat-of-arms of the Grand master within foliage. Dom Frei Manuel Pinto da Fonseca (1681 23 January 1773) was a Knight of the Langue of Portugal. He was the 68th Grand Master of the Order of the Holy Religion of the Knights of St John of Jerusalem, of Palestine, of Rhodes, and called Malta, from 1741 to 1773. He was a Portuguese Nobleman, the son of Miguel Álvaro Pinto da Fonseca. De Ranhados, and wife Ana Pinto Teixeira. He was elected on 18 January 1741. On 25 May 1743 he gave his name to the then town of Qormi giving it the status of a city. In 1749, one of his bodyguards, Cassar, refused to join a plot led by Pasha Mustafa to stage a Muslim slave revolt. This refusal led to the exposure and suppression of the revolt. This event was then celebrated on every anniversary, 29 June. He expelled the Jesuits from Malta. He completed the Auberge de Castille, one of the most important buildings in the capital city, Valletta, which had been started in 1574 and his bust and arms adorn its façade. Today this building houses the Office of the Prime Minister. He made substantial donations to the Conventual Church, and of the most notable mementos worth mentioning are two large and heavy bells cast by the Master Founder of the Order of St. John, Aloisio Bouchut in 1747 and 48 respectively which still hang in the belfries of the Co-Cathedral. Pinto built several storehouses on the Marina which still bear his name. When he died his body was laid to rest in a monument with a mosaic portrayal of him. This is a major tourist attraction in Malta. He was a friend of Cagliostro. His coat of arms portrays five red crescents simbolizing that he once defeated five Ottoman Turks single-handedly. The city of Qormi adopted this as its own coat of arms and flag. Actually, those are the Arms of the. Family with the enamels exchanged. He had an illegitimate son by one Rosenda Paulichi, daughter of Alberigo Paulichi and wife Patronilla Ramuzetta, named José António Pinto da Fonseca e Vilhena, who married his first cousin Maria Inácia Pinto da Fonseca de Sousa Teixeira e Vilhena, illegitimate daughter of Francisco Vaz Pinto (his father’s brother) by one Clara Cerqueira. The item “1764, Knights of Malta, Emmanuel Pinto. Scarce Gold 20 Tari Coin. PCGS AU-55″ is in sale since Saturday, November 25, 2017. This item is in the category “Coins & Paper Money\Coins\ World\Gold”. The seller is “coinworldtv” and is located in Europe. This item can be shipped worldwide.