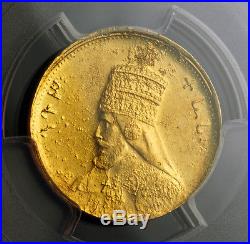 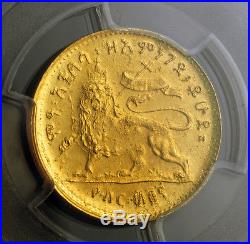 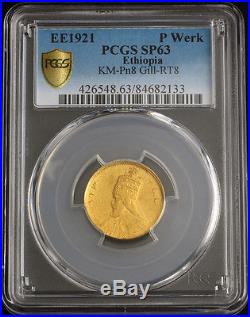 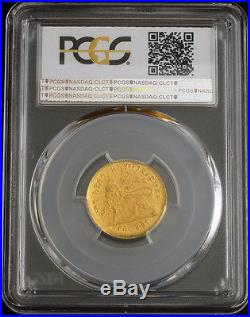 1927(EE1921), Ethiopia, Emperor Haile Salassie (Ras Tafari). Presentation Gold Mule Pattern Werk Coin. Mint Place: Addis Ababa Mint Year: 1897 (EE 1889) Emperor: Haile Selassie (Ras Tafari) Reference: Friedberg 26, Gill-RT8, KM-pn8. Certified and graded by NGC as MS-63! Denomination: Gold Mule Pattern Werk. Presentation issue, a mule struck with the obverse die for the silver 1/8 Birr and the reverse dei for the Menelik 1/32 Birr. An unusual heavy specimen of 9.09 grams, which is 2 grams more than the most known specimens, which are around 6.5-7.3 grams! 900 Weight: 9.09gm Diameter: 21mm. Obverse: Crowned bust of Emperor Haile Selassie left. Date (EE 1921) below. Reverse: Crowned Lion of Judah, holding cross-topped banner with right paw left. Legend around and in exergue. This rare presentation mule issue was likely struck long after the intended period of usage for the dies, as both the obverse and reverse displaying pebbly die rust (as made) within the fields. It is said that Haile Selassie presented these pieces to dignitaries. The Lion of Judah is the symbol of the Hebrew tribe of Judah (the Jewish tribe). According to the Torah, the tribe consists of the descendants of Judah, the fourth son of Jacob. The association between Judah and the lion, most likely the Asiatic lion, can first be found in the blessing given by Jacob to his son Judah in the Book of Genesis. The Lion of Judah is also mentioned in the Book of Revelation, as a term representing Jesus, according to Christian theology. Due to its association with Selassie, it continues to be an important symbol among members of the Rastafari movement. Haile Selassie I Ge’ez. (23 July 1892 27 August 1975), born Tafari Makonnen Woldemikael , was Ethiopia’s regent from 1916 to 1930 and Emperor of Ethiopia from 1930 to 1974. He also served as Chairperson of the Organisation of African Unity from 25 May 1963 to 17 July 1964 and 5 November 1966 to 11 September 1967. He was a member of the Solomonic Dynasty. At the League of Nations in 1936, the Emperor condemned the use of chemical weapons by Italy against his people during the Second ItaloEthiopian War. His internationalist views led to Ethiopia’s becoming a charter member of the United Nations, and his political thought and experience in promoting multilateralism and collective security have proved seminal and enduring. His suppression of rebellions among the landed aristocracy the. , which consistently opposed his reforms, as well as what some critics perceived to be Ethiopia’s failure to modernize rapidly enough, earned him criticism among some contemporaries and historians. His regime was also criticized by human rights groups, such as Human Rights Watch, as autocratic and illiberal. Beginning in Jamaica in the 1930s, the Rastafari movement perceives Haile Selassie as a messianic figure who will lead a future golden age of eternal peace, righteousness, and prosperity. Haile Selassie was an Ethiopian Orthodox Christian throughout his life. Haile Selassie is a defining figure in both Ethiopian and African history. Haile Selassie died on 27 August 1975 at the age of 83 following a Coup d’etat. The item “1927 (EE 1921), Ethiopia. Gold Mule Presentation Werk Pattern Coin. PCGS SP-63″ is in sale since Saturday, July 01, 2017. This item is in the category “Coins & Paper Money\Coins\ World\Gold”. The seller is “coinworldtv” and is located in Europe. This item can be shipped worldwide.