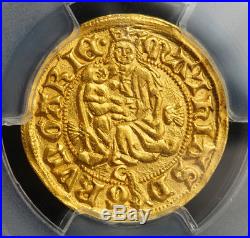 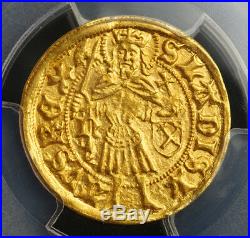 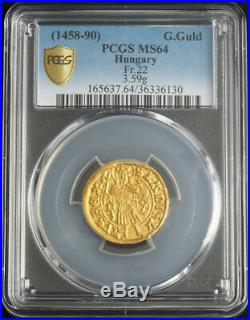 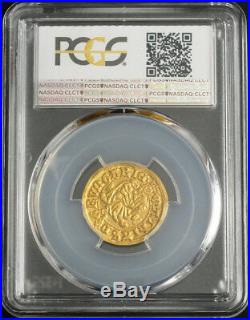 1458, Hungary, Mathias Corvinus. Rare Gold Gulden (Ducat) Coin. Certified and graded by PCGS as MS-64! Reference: Friedberg 22, Pohl K15-6, Huszar 680. Denomination: Gold Ducat / Gold Gulden. Mint Place: Nagybanya (n, today´s Baia Mare, Romania) Mint master (Kammergraf): Thomas Altemberger, Bürgermeister. Diameter: 21mm Weight: 3.49gm Material: Gold! Obverse: Saint Ladislaus I standing facing, holding ax and globus cruciger. Mint initial (n) and privy mark (shield with crossed hammers) of the mint official (Thmas Altemberger) in fields. REX Reverse: Crowned Holy Virgin enthroned facing, cradling Holy Infant; thistle head to either side. Legend: + MATTHIAS D (raven with ring in beak) G R VNGARIE. 1040 29 July 1095 was King of Hungary from 1077 until his death, “who greatly expanded the boundaries of the kingdom and consolidated it internally; no other Hungarian king was so generally beloved by the people”. Before his ascension to the throne, he was the main advisor of his brother, Géza I of Hungary, who was fighting against their cousin, King Solomon of Hungary. When his brother died, his followers proclaimed Ladislaus king according to the Hungarian tradition that gave precedence to the eldest member of the royal family to the deceased king’s sons. Following a long period of civil wars, he strengthened the royal power in his kingdom by introducing severe legislation. He also could expand his rule over Croatia. After his canonisation, Ladislaus became the model of the chivalrous king in Hungary. Matthias Corvinus , also called Matthias I Hungarian. 23 February 1443 6 April 1490, was King of Hungary and Croatia from 1458 to 1490. After conducting several military campaigns, he was elected King of Bohemia in 1469 and adopted the title Duke of Austria in 1487. He was the son of John Hunyadi, Regent of Hungary, who died in 1456. In 1457, Matthias was imprisoned along with his older brother, Ladislaus Hunyadi, on the orders of King Ladislaus V of Hungary. Ladislaus Hunyadi was executed, causing a rebellion that forced King Ladislaus to flee Hungary. After the King died unexpectedly, Matthias’s uncle Michael Szilágyi persuaded the Estates to unanimously proclaim Matthias king on 24 January 1458. He began his rule under his uncle’s guardianship, but he took effective control of government within two weeks. As king, Matthias waged wars against the Czech mercenaries who dominated Upper Hungary (today parts of Slovakia and Northern Hungary) and against Frederick III, Holy Roman Emperor, who claimed Hungary for himself. In this period, the Ottoman Empire conquered Serbia and Bosnia, terminating the zone of buffer states along the southern frontiers of the Kingdom of Hungary. Matthias signed a peace treaty with Frederick III in 1463, acknowledging the Emperor’s right to style himself King of Hungary. In this year, Matthias invaded the territories that had recently been occupied by the Ottomans and seized fortresses in Bosnia. He soon realized he could expect no substantial aid from the Christian powers and gave up his anti-Ottoman policy. These measures caused a rebellion in Transylvania in 1467, but he subdued the rebels. The next year, Matthias declared war on George of Podbrady, the Hussite King of Bohemia, and conquered Moravia, Silesia, and Lausitz, but he could not occupy Bohemia proper. The Catholic Estates proclaimed him King of Bohemia on 3 May 1469, but the Hussite lords refused to yield to him even after the death of their leader George of Podbrady in 1471. Instead, they elected Vladislaus Jagiellon, the eldest son of Casimir IV of Poland. A group of Hungarian prelates and lords offered the throne to Vladislaus’s younger brother Casimir, but Matthias overcame their rebellion. Having routed the united troops of Casimir IV and Vladislaus at Breslau in Silesia (now Wrocaw in Poland) in late 1474, Matthias turned against the Ottomans, who had devastated the eastern parts of Hungary. He sent reinforcements to Stephen the Great, Prince of Moldavia, enabling Stephen to repel a series of Ottoman invasions in the late 1470s. In 1476, Matthias besieged and seized abac, an important Ottoman border fort. He concluded a peace treaty with Vladislaus Jagiellon in 1478, confirming the division of the Lands of the Bohemian Crown between them. Matthias waged a war against Emperor Frederick and occupied Lower Austria between 1482 and 1487. Matthias established a professional army (the Black Army of Hungary), reformed the administration of justice, reduced the power of the barons, and promoted the careers of talented individuals chosen for their abilities rather than their social statuses. Matthias patronized art and science; his royal library, the. Was one of the largest collections of books in Europe. With his patronage, Hungary became the first country to embrace the Renaissance from Italy. As Matthias the Just, the monarch who wandered among his subjects in disguise, he remains a popular hero of Hungarian folk tales. The item “1458, Hungary, Mathias Corvinus. Rare Gold Gulden (Ducat) Coin. Gem! PCGS MS-64″ is in sale since Wednesday, December 19, 2018. This item is in the category “Coins & Paper Money\Coins\ World\Gold”. The seller is “coinworldtv” and is located in Europe. This item can be shipped worldwide.