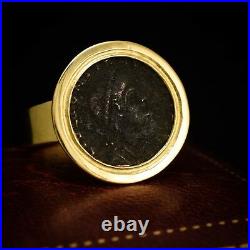 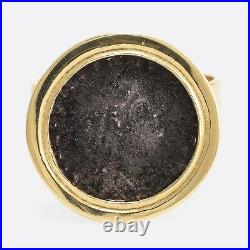 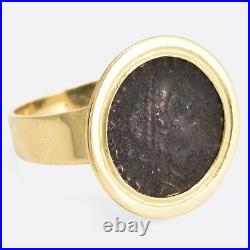 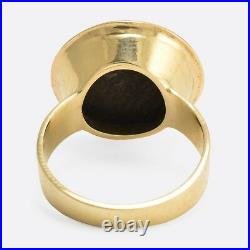 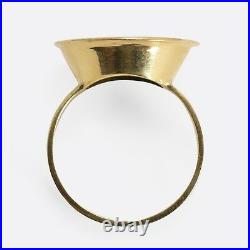 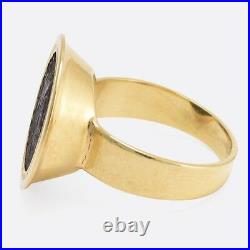 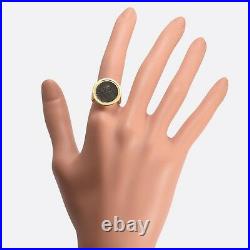 350 AD – Ring Mount, c. This cool Georgian signet ring has been set with an ancient Roman coin. The ring mount is modelled in 18k yellow gold, finely worked with an open back to display the reverse of the coin as well as the head side. The coin is a bronze Siliqua, with a right-facing bust of the Constantius II: Emperor of Rome from 317 to 361 AD. Depicted on the reverse of the coin are two soldiers holding legionary banners. Constantius II was the son of Constantine the Great, and upon his father’s death he ascended to the throne with his two brothers, Constantine II and Constans. In 340, Constantius’ brothers clashed over the western provinces of the empire. The resulting conflict left Constantine II dead and Constans as ruler of the west until he was overthrown and assassinated in 350 by the usurper Magnentius. Unwilling to accept Magnentius as co-ruler, Constantius defeated him at the battles of Mursa Major and Mons Seleucus. Magnentius committed suicide after the latter battle, leaving Constantius as sole ruler of the empire. Head: 18.3mm diameter – Rise off finger: 5.1mm – Width of band: 3.4mm. Ring size: 7.5 – Easily re-sized within reason. No marks present, tests as 18k gold. Very good, light wear commensurate with age and use. The coin is heavily tarnished. The item “Ancient Roman Siliqua Coin Signet Ring 18k Gold c1820″ is in sale since Saturday, January 5, 2019. This item is in the category “Jewelry & Watches\Vintage & Antique Jewelry\Fine\Georgian, Pre-1837″. The seller is “butterlaneantiques” and is located in Sale. This item can be shipped worldwide.